In every project team it is important to define project development stage that relevant to establish the strategy for leadership. For new SimatupangAACE2014 class, the Mentor gave the assignment to build an assessment of class as project using Tuckman tool.

There are five stages of team development introduced by Professor Bruce Tuckman in 1970 present in the following figure[1]: 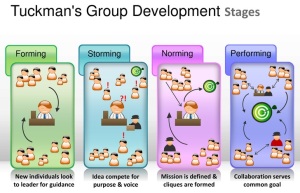 From the above figure, it is explaining the evolution of each member forming interaction that will initiate some frictions in storming stage and later build the agreement after sometimes (norming stage). Final stage of this process will be performing, when each individual reach the same vision and perform collaboration together for group goals.

The only work to do by project member is filling 32 questions developed by Donald Clark[2]. The answers then collected which will lead to score system with their relevant stages status. Indeed, group answers could be different than single personnel opinion and could be bias from the true condition. That’s why for Delphi Technique the P70 taken as start level because it’s not sure in the beginning everybody ready to collaborate serves in short period of first face to face session.

It shows on the table, current SimatupangAACE2014 project stage is PERFORMING (shows by higher score).

As mention before there is possibility to have different opinion between personnel and other group members (in this case personnel opinion is NORMING compare to PERFORMING stage). The basic argumentation is not enough time and maturity level among group member to reach final stage after five days interaction. Also with the fact that many FORCING persons in the team compare to COLLABORATION person according to class simulation using THOMAS KILMAN tool. It seems this team will have the storming level in the beginning before goes to performing stage. This is the bias coming from other members survey result.

In personnel opinion instead having PERFORMING stage, it could be better to select NORMING stage first in the beginning.

Tuckman tool is useful for the Program Manager to establish strategy for lead their team[3]. A false leadership strategy will brought team to disaster process. For further monitoring the Program Manager should initiate another survey after sometimes in order to see if there is change of group stage.

[2]CSCAWEB.org. (2012). Survey: what stage is Your Team In ?. Retrieved from http://www.cscaweb.org/EMS/sector_team/support_files/tools_for_the_team/tool_stage.pdf.